Most people read a lot more meaning from body language and other non-verbal factors than they gain from the words a person says.  Barack Obama clearly won all three debates with Old McCain in terms of body language and the overall “Vibes” he gave off. During the first televised debate in 1960, Republican Nixon looked awful – sweaty and nervous with a “five-o’clock” shadow.  Kennedy, on the other hand, looked cool, calm and collected.  Sounds a lot like the stark contrasts we saw during the debate in Mississippi. Lesson is to study the candidate’s body language for clues into what they are really thinking.  Trust your intuition and gut reaction.

I must note that this and most of my writing is intimately informed by watching MSNBC news coverage (6-8 hours per day.)  Thanks especially to Keith Olbermann, Rachel Maddow, Mika Brzezinski and Eugene Robinson (also of the Washington Post.) Also, I am increasingly impressed with someone I used to not like because of his political views – Pat Buchanan (oh that we all have could have his energy, enlightenment and enthusiasm in our later years.)  You may want to consult my first article on this BLOG:  MSNBC Makes Most Sense of the World (January 18, 2008).

END_OF_DOCUMENT_TOKEN_TO_BE_REPLACED

McCain is Too Crazy to Become President 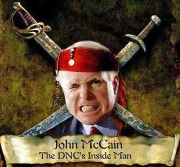 John McCain does not have the temperment to become president.  He is a vengeful vigilante and compulsive liar who has trouble controlling his temper.  These and other severe personality disorders are due in large part to the five-plus years he spent as a POW in Viet Nam.   The psychotic behaviors McCain exhibits are a result of the post-traumatic stress disorder (PTSD). We really cannot trust this crazy old codger who has lost touch with reality.  For more see: Old McCain Should Buy a Farm – Not Become President.

In fact, many of these charges about McCain’s mental illness were originally raised by the Bush campaign back in 2000. At that time, Republicans clearly were worried about McCain’s PTSD and related emotional instability. Now, eight years later and the evidence is clear that McCain is even crazier and less stable.  Our world will be in real trouble if this loose cannon and his redneck sidekick are elected.   Time to send this discredited old cultural warrior back to Arizona to spend his golden years in a rocker like other diabled senior citizens.