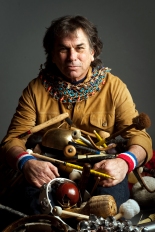 Throughout a career spanning over 50 years, Mickey Hart has been an innovative and inspirational leader in musical research and performance.   Known as “The Rhythm Devils,” Mickey and Bill Kreutzman were the driving force behind The Grateful Dead – particularly during their extended jam experiences.  It is only fitting that Mickey’s latest venture – Mysterium Tremendum – is ground-breaking and entertaining at the same time.  Mickey and his band weave together a host of musical styles and influences, including world music, electronic wizardry, hippie rock, and psychedelic trance.

In this article I will personally review Mickey’s latest CD project.  I will include selected lyrics – written by Dead lyricist, Robert Hunter.  After that I will summarize some other CD reviews, as well as reviews of the band’s live performances.    I have abstracted  some recent interviews with Mickey and several band members – bassist Dave Schools and producer/keyboardist Ben Yonas.  After that you can read about some of Mickey’s innovative, interdisciplinary research projects, as well as some of the awards he has received.  He is truly an interdisciplinary musical scholar who has written some really fine books.

I find the fact that Mickey has been a lifelong musician, who has also explored cutting-edge science to be personally and professionally very inspirational and unique.  I just spent almost three decades in academia earning degrees in Biology, Journalism, and Sociology (Ph.D. Iowa State University in 1986.)   I worked as a Professor of Sociology and Food Science at North Carolina State University from 1987 – 2010.  For the last 15 years I have again been playing a lot of music (guitar, mandolin, and percussion) – something I had done a lot between 1965 and 1980.

Click Below to learn “all you need to know” about Mickey Hart’s life-long and continuing contributions to the evolution of music (and society.)