Most people read a lot more meaning from body language and other non-verbal factors than they gain from the words a person says.  Barack Obama clearly won all three debates with Old McCain in terms of body language and the overall “Vibes” he gave off. During the first televised debate in 1960, Republican Nixon looked awful – sweaty and nervous with a “five-o’clock” shadow.  Kennedy, on the other hand, looked cool, calm and collected.  Sounds a lot like the stark contrasts we saw during the debate in Mississippi. Lesson is to study the candidate’s body language for clues into what they are really thinking.  Trust your intuition and gut reaction.

I must note that this and most of my writing is intimately informed by watching MSNBC news coverage (6-8 hours per day.)  Thanks especially to Keith Olbermann, Rachel Maddow, Mika Brzezinski and Eugene Robinson (also of the Washington Post.) Also, I am increasingly impressed with someone I used to not like because of his political views – Pat Buchanan (oh that we all have could have his energy, enlightenment and enthusiasm in our later years.)  You may want to consult my first article on this BLOG:  MSNBC Makes Most Sense of the World (January 18, 2008).

In this article I will analyze McCain’s nonverbal language in the debate and show what to look for in the future.  This will build further support for the major underlying issues in this campaign – McCain’s advanced age and documented severe mental illness (PTSD).  For more on those vital topics see my earlier articles: “Old McCain Should Buy a Farm – Not Become President” (June 14, 2008); and “McCain is Too Crazy to Become President” (September 11, 2008).  This article is different from my others in that it will be my own ideas instead of an attempt to summarize opinions from others.  BTW, I have a Ph.D. in sociology, MS degree in journalism and have even taught courses on body language and other forms of communication.

What do we mean by body language? This term covers a wide range of non-verbal behaviors and the underlying attitudes such actions represent.  These include:  facial expressions and eye contact, movement and posture; voice tone and volume; and others. There are a number of different uses of non-verbal communication.  Most of these are unintentional, but the best communicators (like Obama, Bill Clinton and others) know how to consciously choose and use appropriate body language.   Books have been written on this subject so I will give you my own observations on last Friday’s debate; as well as the future debates.

BTW, it will help everyone to learn to read other’s body language and control our own.  The following contain valid and interesting information on this subject:

The Importance of Body Language 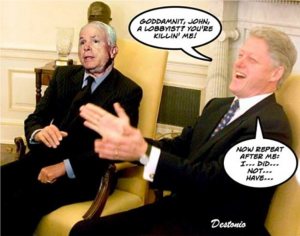 Assessment of McCain’s Vibes:  After all his furious flaming BS about the economy during the days leading up to the debate, Old McCain came off as a drama queen who moaned and groaned way too much.  He looked self-righteous, rigid and raw – unable to unfreeze his shit-eating grin.  He was so disrespectful of Obama and arrogant toward the audience.  Often he would giggle like an old maid and raise his eyebrows in a very scary way.  Seemed desperate and diabolical. 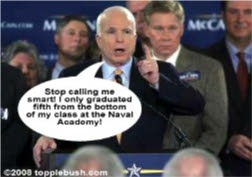 Some of the terms used to describe John McCain’s body language and overall vibe after the debate were right on target.  What is most informative is the fact that McCain acknowledges his rotten personality by repeated claims that “I have never been selected as Miss Congeniality.”  Sure seems like exactly the WRONG kind of person to run our country and restore our reputation in the world.  Here are some of my own and other’s observations:

One of the most obvious nonverbal flaws was McCain’s unwillingness to ever look at his debate opponent.  This caused him to look scare and shifty.  Avoiding eye contact is one of the strongest signals that a person is lying.  On the other hand, Obama talked and looked directly at McCain.  This enabled Obama to call him out on several occasions for lying.  At several points McCain was frozen and gazing into the spotlight like he was having a near-death experience (that makes sense since he is almost dead!!) He often tried to interrupt Obama and would keep right on talking even when his time was up.  This showed utter contempt for his opponent, the moderator and the audience.  Bottom line was that this codger looked disrespectful and decrepit.

What is the new room called an elevator?

Most of McCain’s answers were mainly tired and trite lines from his standard stump speeches.  When he had nothing to say for himself his claim was that “Obama does not understand.”  He never mentioned what he felt Barack did not understand.  On the other hand, Obama kept demonstrating his depth of knowledge and ease with difficult topics.  McCain resisted answering any questions directly.  His focus was almost exclusively on the past showing he has no interest in what the world will be like in the future (since he won’t be alive for it!!)

Another stark contrast was between McCain’s putrid and pasty skin and Obama’s rich and healthy tone.  McCain has old-looking yellow skin and an ugly turkey neck – High Definition is NOT his friend.  He was so stiff and frozen – with occasional nervous giggles and eye tics.  He always had that stupid grin on his face – and his dentures were making noise as he talked.  Like Cheney he reminds me of a penguin.  That is even more relevant when you watch him helplessly trying to raise his arms.  Wack-Wack-Wack this old loser on the head!!

Most of the pundits agreed that McCain looked even older than usual in the debate.  He showed the world it was true when he held up a dark permanent marker (probably only thing his ancient eyes can read.)  Like his other jokes that fell flat, his comment that “My pen is really old,” only served to remind the viewers what an old lunatic this guy is.  He also was furiously scribbling notes (e.g., lines he could remember) during the entire debate.  Then he would randomly insert some trite phrase when at a loss for something meaningful to say.

The overall impression one can draw from McCain’s performance is that he is stubbornly clinging to the past positions and policies – with no innovation or inspiration.  One of the most amazing sound bites would have to be McCain’s final statement.  I almost choked laughing when he led off with “When I got out of prison.”  Then watched Real Time with Bill Maher who hit the nail on the head when he exclaimed:  “Usually when a 72 year old acts this way the kids are calling nursing home.”  Seems like the only place that old coot should be sent – not to the White House.   Our country must not be forced to listen to this old troll under the bridge until he drops dead and Sarah takes over.  If that thought doesn’t scare you then you must be asleep.