Cats Are Creative, Cool and Compassionate

Spring is the best time to pay tribute to my true friends through thick and thin – my cats. Just as people feel passionately about their kids, dogs and other companions, many of us also love our cats. They are smarter and cleaner than dogs. They can be alone for extended periods – but cats do not like to be alone. Above all they model the peaceful, Zen lifestyle that I and many others are trying to achieve. Read this post to understand the many benefits of cat ownership. This features many of the best quotes ever on our furry friends. Also, learn why cats make the perfect therapy animals for the elderly, young people and anyone who would prefer minimal responsibility for maximum cat-love.

This article is dedicated to My Dear Cat – Besha

Living in the country, I played with a number of cats as a child. I adopted my first kitten as adult in Madison. Her name was Sheba and she was a real cool calico. She moved to Ames, IA and then ended her long life in Raleigh. I then went out and bought another calico that I named “Besha.” I paid tribute by twisting the letters around. Besha is doing well – living a zen life of pleasure. My other cat is now a big, white “Tom-cat” named “Rocky.” He is starting to enjoy his big yard here in Carrboro. We are starting to go on spring walks so he (we) can lose weight. 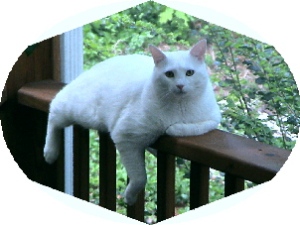 Every cat owner knows the benefits of petting a cat. It’s relaxing, the stresses of the day disappear, the blood pressure drops and the heart rate slows. Therapy cats provide this relaxation — and much more — to people who are shut in, lonely, sick, or troubled. A visit from a therapy cat and her owner is a break in the daily routine for people living in a care facility — always a welcome treat. And a cat provides a kind of love and comfort that only comes from pets.

Therapy cat owners say the most important traits for a therapy cat include a laid-back, steady, calm personality and a tolerance for the unusual. A cat who reacts before thinking is not a good therapy cat. Therapy cats must be able to tolerate sights and sounds that are unusual, petting that could be different or a bit rough, poking or pulling, and any number of other things that are out of the ordinary. Therapy cats are also affectionate, purring, snuggling on a lap or on the bed, or offering other gestures of affection. 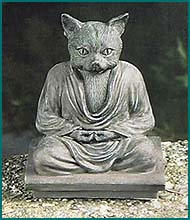 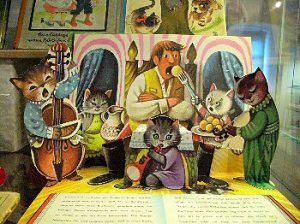 “All over the world, major universities researching the therapeutic value of pets in our society and the number of hospitals, nursing homes, prisons and mental institutions are employing full-time pet therapists.” ~ Betty White, American Actress, Animal Activist, and Author of Pet Love

Researchers are finding that pets truly have the power to heal their owners, especially the elderly. The most serious disease for older people is not cancer or heart disease, but loneliness. Too often, people who live alone or are suddenly widowed die of broken hearts. Love is the most important medicine and pets are one of nature’s best sources of affection. Pets relax and calm. They take the human mind off loneliness, grief, pain, and fear. They cause laughter and offer a sense of security and protection. They encourage exercise and broaden the circle of one’s acquaintances.

Patients in hospitals and nursing homes who have regular visits from pets – whether their own or those brought in from various agencies – are more receptive to medical treatment and nourishment. Animals give the patient the will to live and in nursing homes, the medical staff is often surprised to see residents suddenly “become alive.” Animals have a calming effect on humans and benefit mental well-being, especially with children and the elderly. ….

The innocence of animals and their ability to love makes animals special. Human beings want to be part of their world, to connect with them in a mysterious and powerful way that will strengthen and nurture both humans and animals. That animals feel our pain, our joy, and our stress should come as no surprise for anyone who has a pet. Whether we recognize it or not, the emotional as well as the physical environment we humans create has a direct impact on the way our pets behave.

We emit energy signals related to our deepest feelings that are picked up by those around us – especially our pets. The emotional benefits from animals are difficult to measure, meaning that pets help humans without anyone knowing exactly why. What experts know, however, is that animals allow humans to focus, even for a short period of time, on something other than themselves. Animals, especially small ones, have shown promise for many conditions, both social and physical: 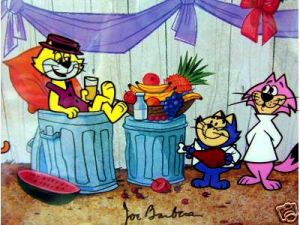 Cats are certainly the most curious and also the most psychic of pets. Throughout the ages, they have predicted earthquakes and other natural disasters, found missing persons and alerted their owners to danger. They can sense when a person needs help. Betty White relates the story of Handsome, a Persian cat who was taken to a nursing home and met Marie, a lonely senior with no friends and no family. She remained curled in a fetal position with no interest in living. She had sores on her legs from constant scratching. After Handsome became Marie’s roommate, whenever she tried to scratch herself, he would play with her hands or otherwise distract her. Within a month the sores had healed. But even more incredible, she was so fascinated with the cat that she asked the staff about his care. Before long, she was inviting other residents to come visit with her pet.

Even more dramatic is the story of Nina Sweeney from Lawrence, MA (USA). Her seven cats and dog saved her life one fateful night in January. The temperature was bitterly cold when she went to bed. During the night Nina was struck with a paralyzing illness that left her helpless. Unable to leave her bed, she listened as the fire in her stove sputtered and died. Outside, the thermometer registered below zero and the numbing chill seeped into the house. Nina prayed someone would find her as she shivered beneath her blankets. Two days passed before neighbors investigated. When they reached her, they found Nina alive and warm, one cat on either side of her, another draped like a fur on her neck. One was nestled on her chest and another under her arm. Beneath the covers were two other cats. Her dog lay across her stomach. Her pets had kept Nina from freezing to death. 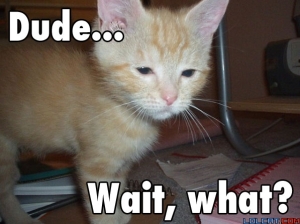 As I like to do I search the Internet and compiles about ten pages of quotations about cats. As a professor I stand on the shoulders of giants. Here are my favorite quotes about cats — mostly by famous people. I also have focused on those that are borne out by my own personal and professional experience with the connections between people and animals. Enjoy and leave comments if you have others!! 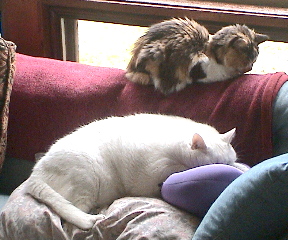 Even those of us who have never had the pleasures of owning a cat know many famous felines. These include: Garfield, Top Cat, Felix, Fritz and many others. Cats have been a major part of human culture for all of our recorded history. Look how many famous Cat Sayings have made their way into our everyday vocabulary: 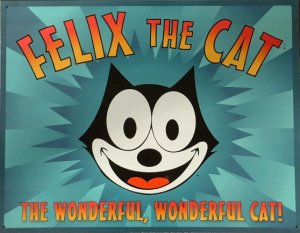 Therapy dogs have been seen in care facilities for decades, a natural offshoot of the service animals that guide the blind and fetch for the disabled. But cats? Persnickety, unpredictable, do-it-my-way cats? Animal behaviorists say it’s entirely possible — although it takes a certain kind of kitty.

Cats raised more like dogs and breeds that have an easygoing temperament, such as Maine coons, can make fine therapy animals, said Dr. Lisa Radosta, a West Palm Beach veterinarian who is a board-certified veterinary behaviorist. “For them, being petted or being next to someone warm is rewarding. And their owners are giving them little treats, training them to enjoy the visits,” she said. “Of course the cats want to go back.”

Oscar, who has lived since he was a kitten in a Rhode Island nursing home’s Alzheimer’s disease unit, was the subject of a widely reported essay in the NewEngland Journal of Medicine. Dr. David Dosa noted that Oscar had a knack for discerning when patients had only a few hours to live, and would curl up next to them on their beds. Oscar’s predictions were so accurate that the staff began alerting family members that death might be near. 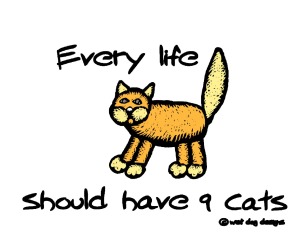 Cats have bested dogs as America’s most popular household pet: There are 73 million pet cats nationwide, according to the American Pet Products Manufacturers Association, vs. 68 million dogs. But felines remain a significant minority in the animal therapy movement, a broad term applied to a variety of programs that support contact with animals as way to relieve stress and bring comfort.

Humans are partially behind the differences between cats and dogs, Radosta said. Dogs usually are socialized when they are puppies through being walked, taken on car rides, and being exposed to different environments and people. Kittens typically get none of this, she said.

Since the early 1980s, multiple studies have looked at how animal companionship can ease loneliness, agitation and even chronic health conditions like high blood pressure by relieving stress and, in some cases, giving people a sense of purpose by caring for their pets. While some were inconclusive, many in the medical community accept that cats as well as dogs in care settings usually are a good thing. “Relieving stress is a good way to help patients heal. Coming to a hospital can be a frightening experience,” said Homer, whose hospital just started pet therapy a year ago. “It was a little more of an unknown with the cats. But they have turned out to be just as effective.”

Seems that many famous people have loved cats over our history. Here are some of the more recent people who favored cats as companions. Note also that Bob Marley, Peter Tosh, Joseph Hill and other Rastafarians certainly liked cats (and feared dogs) as evidenced in their music and dedication to “The Conquering Lion of Judah.”

12 thoughts on “Cats Are Creative, Cool and Compassionate”